Retro Food For Modern Times – You’re Gonna Have To Face It, You’re Addicted To…

I go through phases where I become utterly obsessed with a dish or an ingredient and have to buy it, cook it, eat it, ad nauseam.  Earlier this year it was tahini – I ate more hummus than some of the smaller Middle Eastern countries during that particular phase!  Prior to that, it was the Mary’s Gone Crackers Black Pepper Crackers – who knew that something so good for you could also taste so delish! Before that it was chipotle chillies….I quite obviously have an addictive personality.

You can relax mum. This is not when I confess to the crack/smack/cocaine/gambling addiction.  Sleep safe.  My newest and only…(well, as long as you don’t count things that are French and bubbly) addiction is my version of Mary Meredith’s Television Egg.

Why Television Eggs?  Who knows.  Mary doesn’t explain her reasoning.  In my version she is bereft of ideas and just shouting out random bits of household furniture and food to see what sticks.  “Dishwasher Cheese.  Coffee-table bacon.  Couch potato…that one’s good. Let’s go with that.  What the fuck do you mean it’s been done?  Ok….Ermmm…..Television Eggs.”

(Oh, and in my mind Mary Meredith has a very strong Scottish Brogue.  I’m not going to go all Irvine Welsh on you…just saying that should be the accent in which she is read).

Whatever you call it.   It’s a baked egg with asparagus and tomato.  I love a baked egg.  What I don’t enjoy is scrubbing baking dishes to rid them of the residue of a baked egg, so I have added my twist.  Instead of serving it in a ramekin with toast soldiers as per MM’s suggestion, I’ve been baking them in a hollowed out bread roll.

I have now made four versions of this and plan to make many more over the next few days.  But lets start with the original: 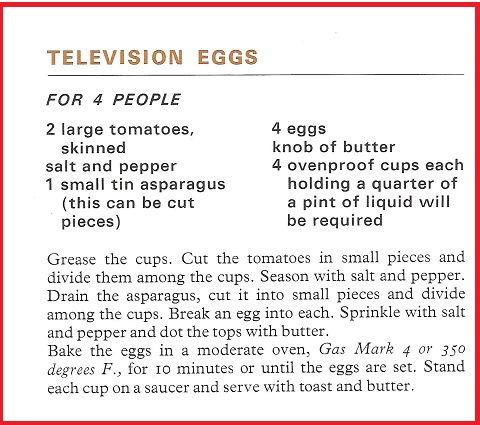 I added some tarragon and a teeny drop of cream into mine, just because I had them in the fridge and neither was going to last much longer.  Waste not want not right? But it points to one of the strengths of this recipe, you can pretty much do what you like with it!

You can, of course, cook your eggs longer for a harder yolk or less for a runnier one.

Whilst the original version was great, I then got the bug and started making television eggs out of everything we had on hand.

My variations thus far have been Rocket, Feta, Tomato and Smoked Paprika:

When I made the rocket and feta version, I also made a breakfast egg to have after my workout at the gym the next morning.  This consisted of Ham, Swiss and Tomato:

A handy hint I discovered was that, if you cook your television eggs on a rack, the bottom of the bread doesn’t burn.

A rack stops the bread from burning

Ok, so that last one may be just for me but you get the drift. Cheap, cheerful, easy, healthy-ish and delicious! What more could you ask for? 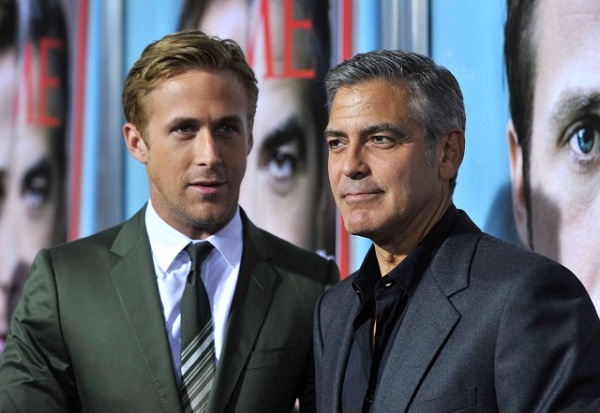 And I believe me, if I was in a position to give it to you, my dear and loyal readers….you’d have to step over my cold dead body to get it.  That would be mine.  All mine.

I’m sharing the eggs though…and they are pretty damn good.

I’m going to be spending my week working through versions of Television Eggs for my lunches.  Oh, and look at the totally awesome retro lunch box  I’m going to buy to put them in:

However you have your lunches, have a great week…and try these eggs!

PS – Late breaking news – newest post gym version – ham, cheese, avocado, chilli sauce.  Put on very low heat before leaving home. By the time you get back (an hour?) this will be cooked to perfection!

The Australian Vegetable Cookbook, sponsored by the food companies Edgell and Birdseye, has its fair share of vegetables turned evil – specifically vegetables turned scary, lazy, nasty and just plain bonkers.   First, for a vegetable cookbook there is a distinct lack of fresh vegetables.  Nearly all of the recipes suggest using either canned or frozen vegetables of the type produced by…oh…I see….let’s move on. I’ve already annoyed the Australian Women’s Weekly.  Multinational food companies also have test kitchens. I need a job.  We’ll leave it there.

I will not be silenced on some of the truly terrible recipes contained in here though.  Maybe if these companies chose their recipe collators more carefully, snafu’s like the ones to be discussed wouldn’t happen.  Recipe collator is a job right?  If not, it should be.  I am available.

Lets start with scary.  In one of the many million Saw films, there is a scene where a girl has to throw herself into a deep vat of syringes.  I have an almost irrational fear of needles, and up until recently, that image from the film was my own private version of hell.  It is still top o’ the list however, the use of the…liquid….accompanying canned vegetables as a food ingredient creates a very similar reaction of visceral disgust in me.

It may be the word liquid that does it.  It’s so….unspecific.  The stuff that other canned food comes in has a name. Tuna comes in spring water or olive oil.  Don’t get me wrong, there is no way I’m using that as an ingredient either, but at least I know what it is.   Similarly, tinned fruit comes in syrup or juice. So why does asparagus come in….liquid? Does the conversation in the lab go a little bit like:

“Well…we know it’s wet….as for the rest…we’re really not sure…to be on the safe side, how about we just go with liquid?”

Yeah, I don’t know why asparagus is being canned in a lab either.  Anyway, the use of the “liquid” is why I found this recipe for Asparagus and Egg Mornay repulsive.  And somehow, the idea of mixing the “liquid” with milk just makes it worse.  Asparagus shake anyone?  Gross. 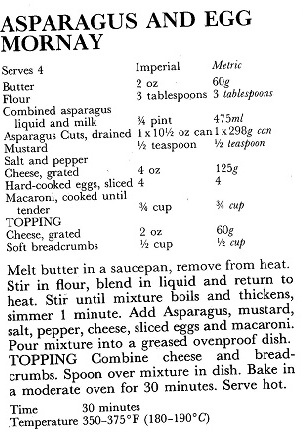 The next scary item is the Asparagus Mousse.  I made this as I wanted to understand the ’70’s obsession with moulded food. Despite making it I still do not understand the ’70’s obsession with moulded food.  It was horrible.  The best thing was that it moulded well.  I thought this would taste like slightly gelatinous asparagus and cream.  It tasted of tin and mint.  I have no idea where the mintiness came from.

I accidentally dropped the cracker I spread with some of this mousse on the ground.  The dogs loved it.  Mind you, they also eat excrement. I didn’t bother making myself another cracker. 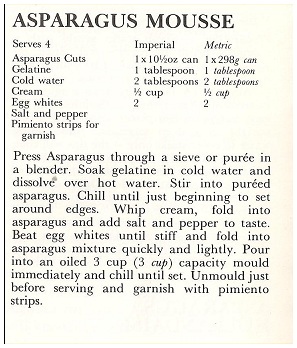 Moving on to lazy we find the recipe for Celery Soup and Cheese Croutons.  The first ingredient listed is a can of celery soup.   Let me make one thing perfectly clear.  If you are making celery soup according to the directions on the can you cannot claim that this is a recipe for celery soup.   It is, at best, a recipe for Cheese Croutons.  Adding parsley or any other herb does not count as cooking.  There is absolutely no reason for this recipe to be listed under celery.

Huh?  What was that you were muttering cynical subconscious?

Given that celery is usually used fresh, using it its canned soup form may be a way for the book’s sponsor’s to recoup some of their outlay?  I thought we weren’t going there.  I thought we’d made a decision not to annoy the multinationals.  They have test kitchens and possibly require the service of recipe collators.  So button it.  We’re going with lazy.  Not with shameless display of self promotion.

Moving swiftly along in the list of crimes we come to the nasty food. Potato Gems aka Tater Tots in the U.S. are made from a blend of potato and….I don’t know what…I’m pretty sure the crusty outside does not contain diamonds but whatever it is, it probably comes a pretty close second in terms of hardness.  Potato Gems / Tater Tots are one of the few foods that actually hate you.  Their sole purpose is to tear the top three layers of skin off the roof of the mouth of anyone stupid enough to eat them. 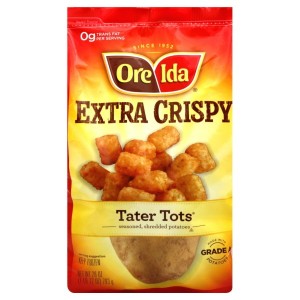 The Potato Gem Pizza is a repulsive concoction created by pressing cooked potato gems into a cake pan and covering them with pizza ingredients.  Sadly, if you Google image Tater Tot Pizza, you get a lot of hits.  I’m not naming and shaming anyone here, but seriously WTF? Here I am thinking I have found a new culinary low and people are not only making it, they are so proud of their creation (and mostly not in an ironic hipster way) that they are posting pictures of it onto the internet.  Admittedly most of these pictures use the Gems /Tots as a pizza topping, not as the pizza base per the suggestion here but really people?  Stop it.  Stop it now.  You’re depressing me.

I would also like to point out that there is absolutely no way the Potato Gem Pizza takes 5 minutes to cook.  It says right at the start you have to cook your Potato Gems for 5 minutes.  You then have to:

Do these last actions happen in a time warp?  Can Potato Gems tear through the fabric of space–time as easily as they tear through your gums?

And finally, the piece de la resistance, the mec plus ultra of food getting weird.  Ladies and Gentlemen, allow me to present the Peach Cheese Fiesta.  What?  You’ve never heard of it?  There’s a reason for that.  In the words of Gwen Stefani:

I like to think an editor hid this recipe deep within the section on Swedes and Turnips, thinking quite rightly that it would never be found. And up until now, it has remained in the obscurity it deserves.  The Peach Cheese Fiesta even had Google stumped.  Until now of course, because by the very act of writing that Google can’t find Peach Cheese Fiesta, I am creating the conditions that will allow Google to find Peach Cheese Fiesta…oh….that’s making my head hurt.  So without further ado, here it is:

I know they took a lot of drugs back in the ’70’s but wow, someone must have stoned out of their mind for this to make sense.  I like the way they suggest alternative receptacles for the cheesy vegetable mix.  I like it even more that instead of these alternatives being fruits and vegetables that are routinely stuffed (tomatoes, potatoes, peppers, eggplants) that they continue the looniness by suggesting  pears and pineapple. I just wish they’d suggested bananas, it would have made as much sense and made my Gwen Stefani reference all the more meaningful.

The Australian Vegetable Cookbook is not all bad though.  I am about to make what will hopefully be a lovely  3 course dinner from recipes contained within the book. I’ll talk about that next time.  Until then, blot the thought of Peach Cream Fiesta from your minds and enjoy your week! 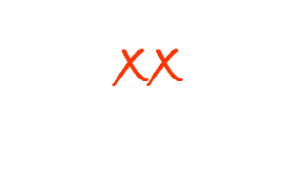 Busy women of the 1970’s loved a chicken salad.  They also loved curly parsley.  I have never seen so much curly parsley in my life as in these old cookbooks.  They also loved scales.  Scales feature heavily in vintage cookbooks.  I have no idea why.  Some sneaky physics lesson maybe.  Which weighs more – parsley or a lead weight?  Garlic or clams?  Maybe these pictures were the precursor to the BrainTraining games of today where you are shown a kitten and an elephant sitting on some scales and you have to say which one weighs the most (it’s usually the kitten). 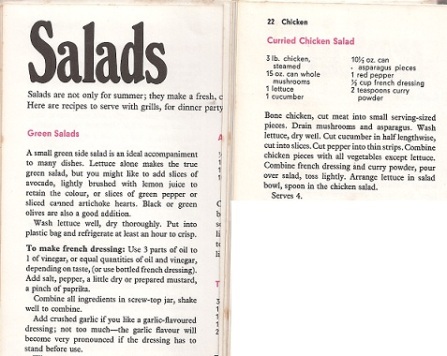 The Busy Woman’s Curried Chicken Salad  is a  a pretty good  recipe, all it needs is a few little tweaks to adapt it to modern taste.  I suggest the following: